Hello Fox Creek Community! On the same day I ordered my second Fox Creek Jacket, about one hour after speaking with Rachel I decided to go on my favorite ride. The rain was on-off with the western sky showing blue. As I headed west on Ca. hwy 20 from Willits I was surprised how the first real rain this season had cleaned the road. Trying to be careful on the twisties; not leaning as usual but keeping up speed so no following traffic could catch up, at mile marker 23.93, a right hand down grade tucked in a canyon recess where the fall sun never shines; I realized the rear wheel was going sideways. 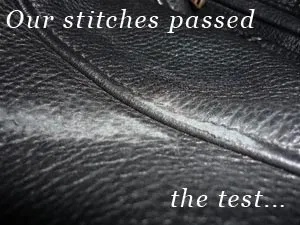 Within an instant I was sliding, behind my bike, as it cut across the oncoming lane. I slid on my right side, starting at about 35mph, the traction the FCL Bomber jacket gave me slowed me down to a stop in less than 40 feet. The bike spun as it headed toward the far shoulder, cutting a diagonal route across oncoming lane, hitting a earthen berm with a loud plop. Thankfully I was OK, bruised where my keys were in my back pocket. The jacket didn’t show any damage. Later, I examined the jacket for abrasions; I found the path of travel from RH wrist cuff up the arm, scratched armpit vents (two of 4 grommet vents scratched), scratched shoulder pleat, down back with last scratch at kidney panel area.

The pictures show the damage to my levi’s and denim (Stilh chainsaw) chaps. I found my key ring (later) under the bike. They fell out the new hole in pocket when I was trying to pick up the bike. The jacket saved me!!! If I was wearing something with less road grabbing traction I would have slid much further, possibly crashing into the earth berm with same force as my bike. Some tourist coming uphill had seen 3 bike wrecks from slippery road in the three miles before they saw me headed downhill. They knew I was in trouble before I did; fortunate for me, the guy helped lift the bike and gave me a ride back to town.

We want to thank Chris Rooney from Willits, CA for his story and pictures.