After getting out of the army in 1970, I engaged in the typical roaming odyssey that afflicted my generation. After six years, I settled on the banks of Fox Creek in the Blue Ridge Mountains. It's a beautiful part of the country where a carpenter with his own truck, tools, wife, and two kids could earn four dollars an hour. The desire to have food and clothing led me to supplement my income, and Fox Creek Leather was born.

I began selling leather on the road at swapmeets, drag races, parties, etc. The residual fear the public harbors towards bikers can probably be traced to these early bacchanalian rites. Even the most outrageous events of today seem like well-coordinated church functions compared to what used to go on. People got shot. People were run over. People fell down. Security was heavily armed and nervous. At the exit gate of one event, a billboard read: "Before you leave make sure you have your helmet, your license, and your clothes." 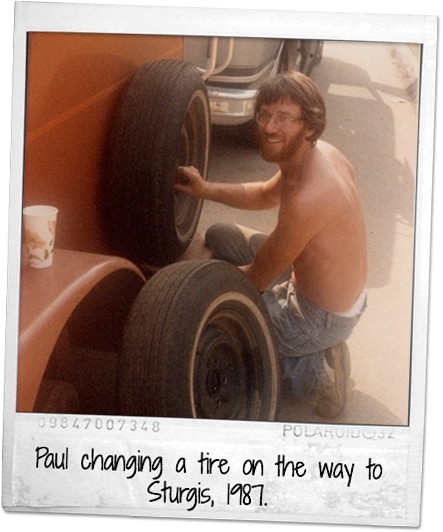 My entire family worked the circuit, sometimes gone a month at a time. It was a great place to bring up kids. They got to see everything imaginable, with parental supervision. I remember one late August night in Sturgis, my young sons listening to some reformed-addict Christian biker friends talk about how happy they are to be alive, their dead friends, how bad this or that had messed them up. Best anti-drug program ever.

Because they were my crew, my kids were exempt from the over-21 rule most venues had. At one event, my five- and eight-year-old boys asked if they could join the crowd to watch the "Wet T-Shirt Contest." You didn't see a lot of t-shirts at these contests. The boys came back to the stand, arms folded across their chests and seething with moral indignation, shaking their heads and muttering "unfair, unfair." I asked them what was wrong. They said the girl with the largest breasts hadn't won. 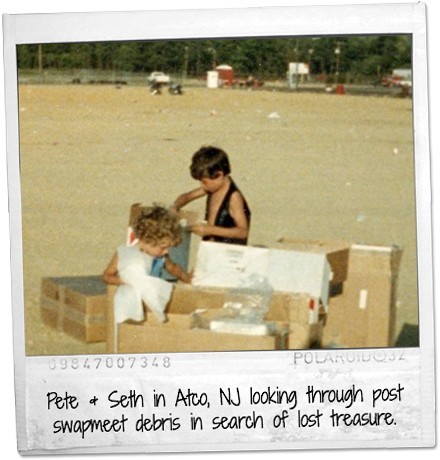 Back then everything was made in the USA. I sought out the best craftsmen I could find and have maintained these relationships for the last twenty-five years. These days, 98% of what you see from other companies is imported. Most of it doesn't fit or last. Through misleading labels and clipped tags, these products try to insinuate that they have something to do with the U.S. Unless it says "Made in USA," it's not.

Why Made in the USA?

"Back then, everything was made in the USA."

We recently have renovated and moved to the Black Rock Motel two miles north of Independence on Highway 21. We are up to twelve computers four indoor bathrooms and a dedicated retail space. Y'all come! The two hundred plus year old log cabin I live in on Fox Creek still sports a "Johnny House" as the sole means of communing with the waste spirits.

I would like to thank all of my employees, past and present, and the thousands of returning customers who have taken care of my employees and my family.