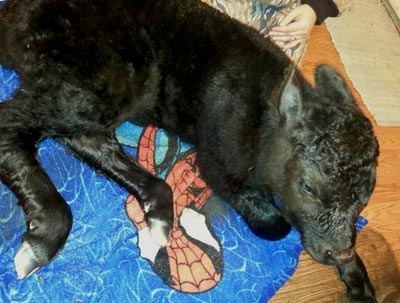 Everyone who knows my family well knows one thing for sure, we love animals. Big ones, little ones, pets and livestock are all the same to us.

On February 16 (three days after our biggest snowstorm in years), my husband Bill went to feed our cattle. One of our older cows kept running to the tractor and bawling and running over to a bank and looking back at Bill. After a couple frantic dashes, Bill got off the tractor to go see what was going on. There over the bank standing in a swampy area was a beautiful little black calf. Did I say little? He turned out to be one of the biggest calves ever born on our farm, weighing in at just under 100 pounds and as tall as his 2 month old cousins.

The baby couldn’t come to the mother and the mother wouldn’t go down after the baby, so Bill made his way down the bank and carried the calf back up. Bill knew right away this little bull was in pretty bad shape – poor thing was almost frozen. His hooves were white and soft where he had been standing in the freezing bog so long. Blankets and warm milk were hurried from the house, but nothing seemed to help. He was so weak – I stretched out over him, massaging and trying to restore circulation and warmth. He was so literally close to frozen that his flesh did not move under our hands when we rubbed him… it was almost like rubbing your hand across water-logged carpet instead of a furry critter. His mother and the bull stood right over our shoulders and watched as we dried and massaged him to warm him up and poured warm milk into his frozen mouth.

A House Full of Love 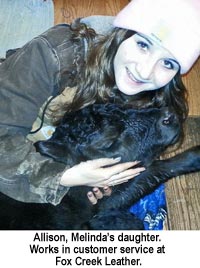 We decided to try something that my dad used to do when I was growing up: we brought him to the house and kept him in the kitchen near the woodstove. This brings back wonderful childhood memories of my dad and how he loved all critters. Mamma cow followed us out to the gate but didn’t throw a fit, I am certain she knew we were doing all that we could to help her baby.

Everyone was excited when we brought a calf in the house, even the dogs. We kept telling the kids to rub on him and keep trying to get him warm, all the while telling them not to get their hopes up because he may not make it. We set an alarm clock for nighttime feedings and after each bottle he was a little more active. From 5:00 the evening we found him until about 5:30 the next morning he barely moved and never mooed a time. Imagine how thrilled we were to be awakened to the sound of little hooves sliding on hardwood floors and a little moo. 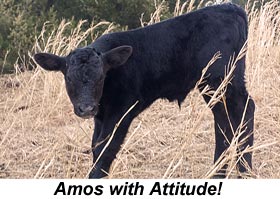 We hurried down the stairs and rounded the corner to find him trying to walk on the hardwood but instead he was sliding like Bambi on the frozen pond. His hooves had thawed and hardened, so another warm meal beside the woodstove and it was time to take him back to his momma. We waited until it warmed up that afternoon and Mamma came right to him when he entered the field. They’ve both been just fine since. Within 24 hours he went from nearly frozen to death to behaving like any other newborn hanging out with his mom and nursing. The next day he was actually running – it’s gratifying to watch him play in the field with the other calves! I believe that an animal’s name needs to reflect his personality so I have decided to name him Amos in honor of his strength. I will be expecting some pretty calves by Amos in a couple of years. 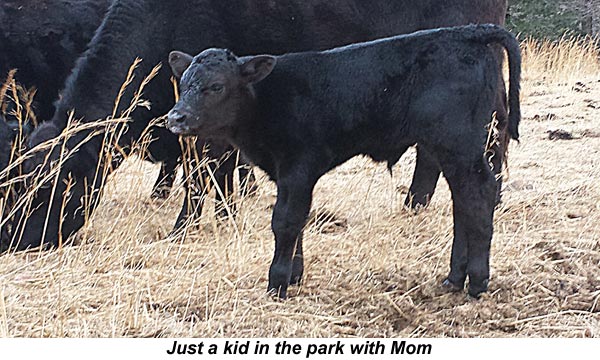