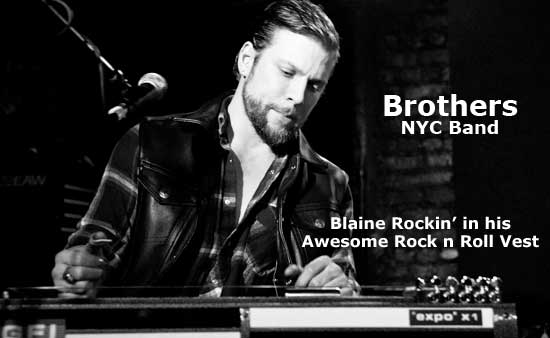 I get more compliments on this vest (Jean Biker Vest) than any other piece of clothing that I’ve ever worn. I have had 2 people already try to buy it off of me on the spot with cash. I got it as a Christmas gift from my sister this year and I absolutely love it. I promise that I won’t sell :) I wear it in all weather and all occasions. It fits like a glove.
I’m in a New York City based rock band called Brothers. I play the pedal steel guitar, harmonica, and sing back up. We play a bluesy / country style of rock that’s heavily inspired by the rock of the 70’s and motorcycle culture. We all live in New York, but 3 of us are from Virginia and 2 are from Oklahoma. I myself grew up in Roanoke, VA.
We released our debut album last year on the 4th of July at a massive BBQ where we also debuted our first music video Real Long Way To Go. We did a summer tour across the mid west and have been playing in progressively bigger venues with an ever-growing base of loyal and dedicated fans. We go in the studio next week to start working on our sophomore release (Volume II) and plan releasing it on the 4th of July as well. We’re just a bunch of good ole boys that love America, Rock and Roll, leather, motorcycles, and beer. We just happen to be living in the city that doesn’t sleep. — Blaine
You can check out the Brothers Facebook page at https://www.facebook.com/brothersnyc. Like them and tell ’em Fox Creek Leather sent you!