In June of this year Fox Creek Leather staff had the privilege of meeting Ursula Wachowiak aka ‘The BROAD’ (“Babe Riding Out A Dream”) on her mission to explore the U.S. on her bike. She couldn’t pass up the chance to stop at Fox Creek Leather while in the area since she’s such a fan of the Classic II Jacket and Leather Chaps she’s been wearing for the last three years. The crazy rainy weather kept her here for just over a week. During her stay, we learned more about her life on her Sportster and what led The BROAD to the nomadic lifestyle. 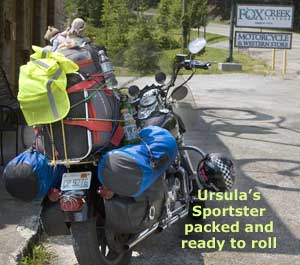 Just a few short weeks later, we heard that Ursula was involved in a near-fatal crash while en-route to Sturgis. A driver was passing a semi and hit her essentially head-on. She managed to swerve to the edge of the lane, but couldn’t completely get out of the way.

When she woke up in the hospital four days later, Ursula was given the bad news: her left leg was so mangled that she had the incomprehensible choice of trying to salvage the limb or have it removed. It is a little difficult to tell from this photo, but Ursula made her decision and the surgeons amputated her left leg just below the knee. The surgeons then implanted a temporary four inch spacer in place of her femur soon to be replaced with a cadaver bone transplanted with her own marrow. 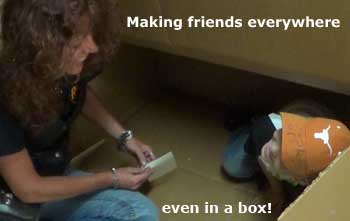 Ursula makes friends in all shapes and sizes everywhere she goes. While Ursula was in Independence, she joined Jackson’s game in a cardboard box. He was so sad when he heard about her accident that he drew a picture of Ursula on her motorcycle to send her. Although Jackson’s visit with Ursula was brief, he sensed the courage and attitude that have brought her to this point and will carry her onward. Jackson believes Ursula will ride again.

Fox Creek Leather had been supporting The BROAD’s journey, and now we are sharing her story. The BROAD needs your help. Her medical bills are staggering – the hospital bill alone approaches $400,000, and that doesn’t include the 3 surgeons, the upcoming physical therapy and surgeries, or the prosthesis Ursula still needs. The various insurances at this point barely cover 11% of the existing costs which will only climb as she receives additional treatment.

Ursula’s friends have set up a page at Gofundme where anyone can help by donating. Whatever you can afford is greatly appreciated. Bookmark her pages and stories:

To give Ursula’s fundraiser a kick in the britches, Fox Creek Leather is donating 10% of all sales from this newsletter/blog entry to Ursula’s recovery. All you need to do is click any link in the blog to make your purchase. No, you don’t have to buy what you first land on. As long as you click through from the newsletter OR enter “Donate to Ursula” in the notes section at checkout, 10% of your purchase will go directly to The BROAD.